The theme of the last month, in my world, has been Recovery.

There are two definitions for ‘recovery’; The first is, ‘A return to a normal state of health, mind, or strength’. The second is, “The action or process of regaining possession or control of something stolen or lost.”

I think we can all agree that the first definition might not apply so much, since there’s still no ‘normal’ to go back to, especially as Covid cases are rising once again in what looks to be a third wave (and flu season isn’t even in full swing yet). The second definition, though, has struck a cord in how I’ve been feeling and where the bar is. When Covid hit in March, I was devastated and lacking motivation for months. Even though the community was amazing and showed up week after week, for some reason, I felt like all I could energize myself to do was the bare minimum; order beer, run payroll, add a craft here or there where able, rinse and repeat.

Since the beginning of October, though, something has shifted. I don’t know if it’s that I’m finally becoming accustomed to this new state we’re all living in or if the stars aligned to get me out of some weird Mercury retrograde bullshit, but whatever it is, I’ve been feeling like my old self and have found the energy to take on some new projects at the bar. Am I at 100%? Probably not, but that’s ok. Just like the second definition says, recovery can be an active process rather than an end state.

So, what am I now working on at the bar now that I’ve found this new energy? Most of it is stuff that I geek out about that no one else will notice, like organizing the office, updating some craft logistics, and changing our Point of Sale system and loyalty programs (I know, very boring). BUT we’re also doing some mad updates to the back patio and have some fun events in the works collaborating with our badass business lady neighbors at Fillaree and Hairizon (stay tuned!). The back patio, as of a few days ago has nice new string lights up, an outdoor heater, and plants planted in some old whiskey barrel halves. Massive shout out to a couple of my in-laws, Hilda and Jerry, for driving from Charlotte area and helping me with it. There’s no other way all that would have gotten done in such a short amount of time if not for them. Shout out to Emily and Bryana, too, for their help in ‘Phase 2’ of making the patio look nicer where we painted the tables blue.

Phase 1: AKA that time I panic-purchased as many picnic tables and umbrellas as I could afford so that people would feel safe at the bar amid reopening. 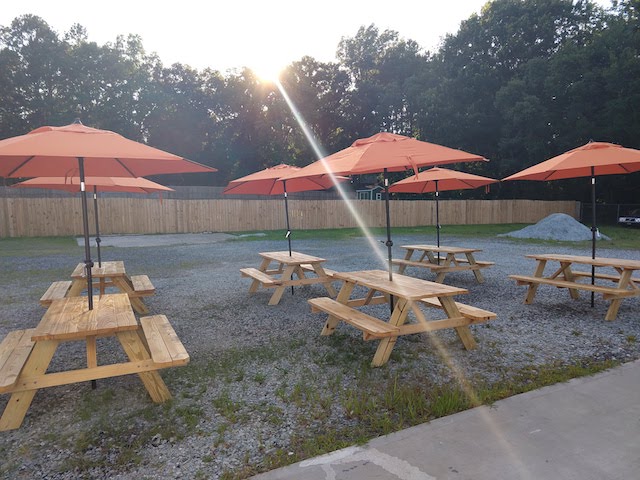 Phase 2: Painted the tables because after just a couple months of the elements beating down on the tables during the summer, they just were not looking great and clearly needed a protective layer of paint. 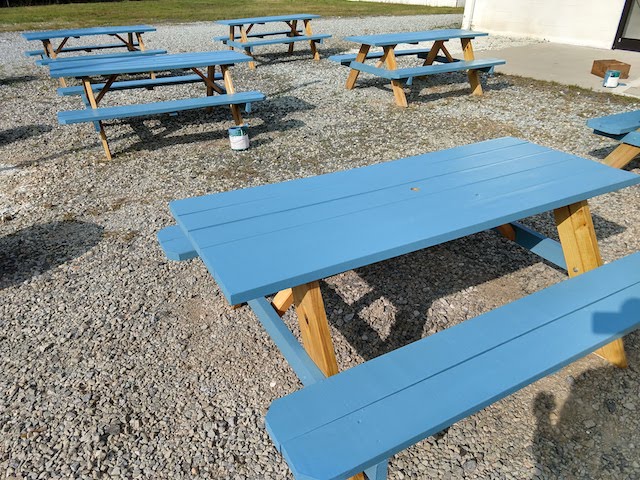 Phase 3: Added string lights, plants, and a heater! Once I get something painted on the blank wall, it’ll have officially entered the final stage (for now). Eventually I’m going to add a couple speakers that tie into our indoor audio so people can hear the music, but that’s going to be an expensive project and there’s no way I can allocate money to it at this time. We’ll get there eventually, though. 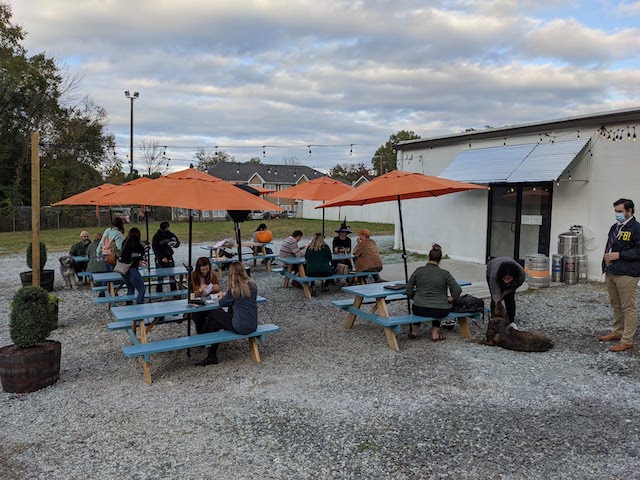